I have made it no secret how I feel about our fertilization program here at Stone Creek. We have been on the Redox program going on three years for our greens and have now started applying to the tees and fairways. One of the factors keeping us from going to a liquid method to the fairways was the way in which we would have to apply it. The traditional fixed boom method would take us much too long and with public play beginning before 5:30am we would never get it done.

The boomless nozzle isn't anything new but when Redox worked with Greenleaf Technologies to develop an air inducted Boominator nozzle to apply their product, they hit a home run. The air inducted venturi which precedes the nozzle is what makes this work so well. I first became aware of this nozzle while I was in Vancouver BC at the Canadian Turfgrass Conference. The Brett Young company was promoting it along with their line of Redox fertilizer. What I didn't realize was how few of these are actually available. I managed to get a hold of a pair from Mike Powers from A&L Supply.  He told me we probably possess the only two in the United States. From what I see, the demand will soon increase and they will need to step up production. 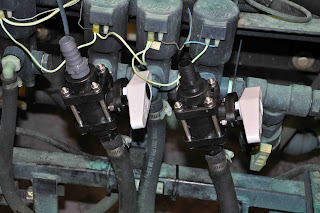 Installing the valves was simple. We simply placed a TeeJet 3-Way Nylon Manual Ball Valve between the #1 and #3 electric boom valves and the spray booms. This allowed us to simply direct the flow to either the booms or the boomless nozzle with a quarter turn. This also gave us the use of the left and right electric valves for simple operation. 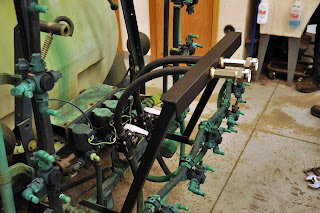 Using a couple pieces of angle iron, Steve built a frame off of the existing boom frame and set the height at 42 inches (We read that they can be set from 36 to 48 inches so we chose the middle). He then bored a couple holes large enough to attach the valves using a couple bulkhead couplers. Once we installed them we ran them in the parking lot and made sure that they met at the bottom without an overlap.

Our Toro Multi Pro 5500 is equipped with a Raven control system so we had to set the parameters so the calculations would be accurate. Our effective spray width was measured at 33 feet so divided that by two and multiplied by 12 inches which gave us the number 198. We plugged that number in the "boom one" and "boom three" calculation. Boom two was set at zero of course.

Below are some photos and a video which show us spraying water over the nursery. Note the distribution uniformity and how fast we are able to travel. At 40 GPA Mike calculated that he should be able to spray at a rate of 24 acres an hour. That is basically a tank, which is 300 gallons, every 20 minutes, which will cover 10 acres. At that rate it should be less than three hours to spray the entire course including mixing and loading. Once we make our first application in August I will post an update on the process and let you know how it worked. From what I can see it looks very promising. 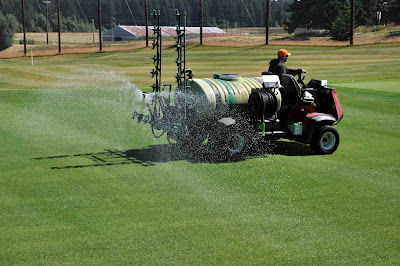 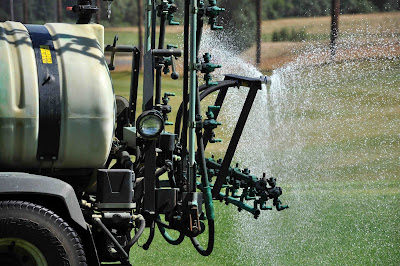 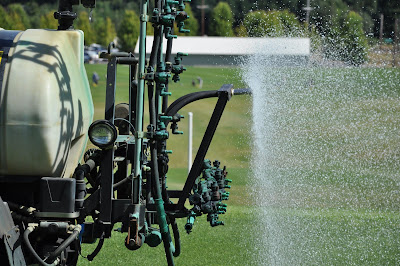 David Phipps
Oregon City, Oregon
I am a golf course superintendent now working for the GCSAA, serving superintendent members and their chapters across the Northwest United States.